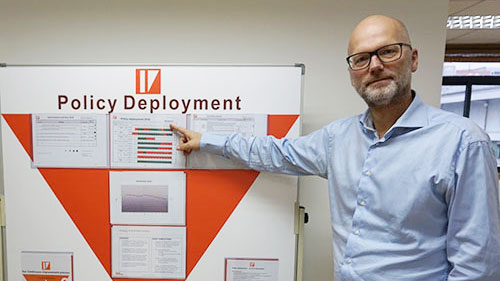 - 2016 was by far the best year ever for IV Group. Not only good financial performance was achieved. Enormous improvements were achieved in customer-related KPIs such as delivery and quality performance as well as major efficiency improvements. A structured continuous improvement programme, implemented at all sites, has played a major role in the positive development. Last, but not least, a good foundation was also built for further growth with both current and new customers, says Magnus Emeus, CEO of IV Group.

Several indicators have continued to show a positive development in 2017 through the implemented improvement programme.

- Our improvement program creates a way of working and an environment that basically drives improvement, because you always have to set higher goals against actual performance, and on a monthly basis you have to present "corrective actions" if you don't achieve the goals. Having picked up this methodology during an 8-year period in the automotive industry, this way of organizing continuous improvement programs has always been very successful, concludes Magnus Emeus.

IV Techmould in Suzhou outside Shanghai is IV Group's largest operation. They have been instrumental in the development over the past 18 months. Productivity improvements, installation of a new and efficient painting line, changed tooling strategy, management rebuilding along with many other initiatives have all played a major role in the positive development.

- 2016 was the best year in IV Techmould's history, and the improvement journey continues this year with improvements in all important performance areas. In order to assist our customers optimally, we continue to make the necessary investments. This year we also optimized the workflow through layout changes in the factory. It is very positive that our improvements are recognized by both existing and new customers, so that we can win new project awards in a very competitive market, says Fredrik Carlsson, MD at IV Techmould

IV Moulding, in Leksvik Norway, has also had a good development during the last 18 months. Changes in management and several cost cuts have been carried out during 2016, which led to a much lower break-even point compared to before, as well as a significantly improved operating result.

In parallel with significant productivity improvements, we have also worked very hard on new sales measures which are crucial for the long-term development of the company. This has paid off, and we have received new projects from new customers and are in good discussions about further projects with new customers. With the new customers we have connected with us, we have created a new foundation for the company which will be very important for many years to come, comments Magnus Emeus, acting director at IV Microplast.

Industrial tools, also in Leksvik Norway (supplier of tools and machining) is growing year by year. After seeing good growth during 2016, the company has a good foundation for further developing the business in 2017.

- The growth is happening both with current and new customers in all parts of the company. New tools, maintenance and renovation of existing tools and machines. To support growth, we have increased capacity by strengthening the organisation. Our experience and competence is one of the main reasons why we have this positive development, says Kaj Vidar Sandvold, MD at Industriutilok.

Dominik Kordowiak is appointed Managing Director at IV Frohe Poland. Dominik has been working in the company for more than 15 years and was earlier the Sales & Project Manager.He will start his new position the 1st of September 2021.

Michaela Runeberg is appointed as new Managing Director at IV Frohe Sweden. Michaela has been working in the company for more than 10 years and has been the HR Manager since 2015. Among many things, she has been responsible for environmental questions (both external & internal) as well as change management including implementing lean production methodologies.

Kjell Olav Kleveland will start as CEO of IV Molding on 6 April 2021. Kjell Olav was previously finance manager at IV Molding and will also retain this position after being promoted to CEO.

IV Group has completed the acquisition of the Swedish-based Frohe Group. The company was established in 1991 and is today mainly operating in the Medical- & Industrial sector. The acquisition means IV Group is adding Medical to its portfolio as well as expanding geographically with manufacturing sites added both in Sweden and in Poland.

After year-on-year improvements in 2016 and 2017, IV Group can proudly announce that the development continued in 2018. New sales were won, and together with further KPI improvements, IV Group expects to continue the positive development in the coming years.

IV Microplast AS changes name to IV Molding Leksvik AS. The new name is international and better reflects the company's business and operations.